This simple fact is perhaps the most significant reality in the current political polarization of the United States’ electorate. On its face, it signifies that the current Republican Party is doomed to disappear unless it can make some fundamental changes.To detail some of the differences between urban and rural realities, let’s look at a few.

1.Living Environmenta. City folks live in densely populated areas. While this factor has many advantages in terms of employment, schooling, shopping, transportation, etc., it also presents many threats. Privacy, crime, traffic, and a general proximity of government – in schools, police, regulations, zoning, etc. which make some level of government an ever-present factor in almost everything a person may want to do. b. In contrast, rural folks generally have a lot of room to live in. This allows them a high level of privacy and keeps their connections to government minimal, mostly for emergencies.

2.Personal Freedom vs Government Presencea. Any changes a city person may want to advocate, whether traffic, child’s school, voting places, building a house, or many other possibilities requires convincing other people to join in. Thus organization, publicity, money and time are key components of change. b. Rural folks can make many changes in their lives without anyone’s permission. Their privacy begets a high degree of personal freedom.

3.Amenitiesa. Some of the advantages of urban life are proximity to medical and social services, whether hospitals, shopping options (including economically indexed stores and entertainment), cultural events, ball parks, and a myriad of other opportunities. b. Rural locations offer few of these amenities as a rule, and some of these deficiencies are critical, particularly shortages of medical facilities.

4.Religiona. There are many other differences, including a sense of faith and religion. The farmer lives close to nature and witnesses every day the power and wonder of life, growth, weather, birth and death. For the farmer, faith in God becomes an apparent explanation of all these mysteries. Religion provides an expression of these insights as well as fellowship in the quest. b. The city dweller is surrounded by the works of humans, from physical buildings, highways and artifacts to the power of change which resides in humans, whether political, judicial, or financial. People in the city are removed from the wonders and mysteries of nature by layers of human power, which must be appeased in order for life to proceed. Since religion does not directly provide answers to the most pressing problems of daily life, its importance is often compartmentalized and downgraded, frequently to oblivion.

5. A Practical Example: Gunsa. So, how does this difference in world views affect the Republican Party? The differences have a profound effect on political views. To take one obvious example: guns. City people tend to see guns as a threat, since the only times they would usually be exposed to guns would be in the commission of a crime. It seems obvious that outlawing guns would reduce the criminals’ opportunities to procure and use guns for nefarious purposes. The observation can be made that criminals can always find a way to get a gun whereas an ordinary citizen could not. But, since few ordinary citizens have guns anyway, outlawing guns would not change that factor and it might limit casual crimes with guns. So, why not do at least one thing to limit crime?

b. The farmer and hunter find this idea ludicrous. To them, guns are tools of protection of livestock from predators, hunting meat for enjoyment or necessity, and just part of life. They react to calls for outlawing guns as an attack on their personal freedom.

a. The Republican Party stands for personal freedom,The Democrat response increasingly is: majority rules (including the elimination         of the electoral college and the two-senator system),

b. Republicans favor a strong defenseDemocrats favor a nominal military for “imaginary” defense (leading to isolationism),

Some ideas:1.      Open Republican eyes to the challenge and stop acting as though this is 1950’s America. The 2001 and 2016 elections should have been enough of a wake-up call, i.e. depending on the electoral college to win the presidency.

2.     Take a leaf from the Obama playbook, and formulate a platform containing solutions for each of the urban constituencies – blue collar workers, unions, suburbanites, women, Blacks, Hispanics, evangelicals, even the gay contingent.

3.     Much of this work was begun by Ronald Reagan with workers, and George W. Bush with Hispanics, and revived by Donald Trump with Evangelicals. The current alienation of the Black community from Donald Trump must be overcome. They are ready to be converted – after having been abandoned by the Democrats for a generation. But they must be invited! Trump has the right idea – what do they have to lose? So, where are the leaders of Black Republicans? Herman Cain, Robert L. Johnson, Charles Payne, Condoleezza Rice, Colin Powell, Denzel Washington? Somebody has to talk to them. They must be made to feel welcome.

4.     The communication capabilities of the Republican Party seem in need of overhaul. The first step is to come up with the right message. This requires the city skill of organization. Somebody has to reach out to all the different constituencies, identify their needs and hopes, find spokespeople, get them together and develop meaningful messages. Secondly, outreach to these communities has to be developed and executed, Republican clubs started, etc. There are thousands of people in the Party who know how to do all these things. They have to be energized.

5.     So, get focused and get going. Don’t wait for an Abraham Lincoln to come along after the dissolution of the Whig Party. That may be too late.   ©

2018 Richfield Press. All rights reserved  Dr. Fedewa has been a  guest on the Donelson Files and has his own podcast, the Dr. Larry Show.

In 1980, I had a debate with a fellow conservative who was 15 years older than about the future. He was pessimist and I mention to him “I am optimist because I have a child and I will fight for policy to ensure her future.”  In 1980, the Soviet Empire was on the march, we were suffering from double digit inflation, the Western civilization itself look like it was tottering toward the abyss.  We were told that our resources were running out and there were too many people on this planet.  It is not much different than today in which our culture appeared to be crumbling, our planet is warming and we are doomed to a overpopulated, over heated planet and our resources running out.

Today, my children are adults but still I am amazed how some of the right and many on the left are pessimist about the future.  In 1970’s, the threat was pollution, a new ice age approaching, over population and running out of resources.  Yet, today we are living better than ever.  More people in the world are escaping poverty, and overall standard of living has improved.

When I bring up these facts, I am amazed how many people simply don’t believe that this is the case.  Recently on twitter, I had some guy say I was wrong and where was the data to show this, so I began with four recent sources and told him I could easily flood with him with many more.  I doubt that this will make him happy as he certainly will find some pessimist who will be happy to share some data to prove himself right that the world will end soon but the evidence is in front of us

Over the last fifty years, I have read enough predictions, none of which came through. The book, “The Population Bomb” painted a dismal picture of the future but our population has doubled and the world is now feeding more people better than ever before.  The human mind proved to be the ultimate resource, as the late Julian Simon demonstrated in his book by the same name.  The 1972 club of Rome report stated that overpopulation will lead to depletion of resources.  It didn’t happen as resources seem to be proving more plentiful than before with more than double the population.  In the 1970’s, a new Ice Age was upon us, it didn’t happen and now global warming will kill us but for the past three decades, we have been told repeatedly that we have ten years left but then when decade comes and the world has not ended, we are then told ten more years are left before the end of humanity.  The number of failed predictions and new theories on the world end keeps coming and crashing.  Eventually I guess a astroid will hit this planet and the pessimist will prove to be right.  If you keep predicting the end of the world, eventually it will come but in the meantime,  our world keeps improving.

There is much left to accomplish but we have been cursed with a political class and elite that seems to want to believe the end is near and today, it is climate change that will kill us even though for million of years, we have seen climate change on our planet. It is a given fact that climate change, weather changes but what allows us to survive is our ultimate resource, the human mind.

To the guy I had twitter discussion, I concluded to him, “For the past fifty years, I have heard the end of the world is coming and yet it never does, so if you want to wallow in your pessimism, fine. Wallow in it.”  The poor fellow simply doesn’t comprehend that the very policy he wants enacted will only make his children future bleaker.  For me, I look to a better world and I go back to what I told my conservative friend in 1980, I am optimist because I have a child and I will fight for policy to ensure her future.”  My children are now adults and I still have life left to finish and I be damned if I allow the pessimist to destroy the future for my children and others.  The end is not near.

The Donelson files webpage is designed to open up debate and I do invite people who disagree with me to write for this and we also have vigorous debates on the podcast Donelson Files.   What others write on the Donelson Files reflects the writer’s point of view and not the Donelson Files or for that matter, yours truly, Tom Donelson.

I sought ways to find the words to say

Bled my knees raw before the gods

Pressed my ears against the standing stones

Journeyed deep within a vortex

Only to discover the words I couldn’t say

I will allow the additional drama about Kavanaugh to simmer before commenting further but so far, I see an Ambush and not a Ambush of Truth as one individual claimed on the Batchlor Pad last night but there are so many parts still in play. 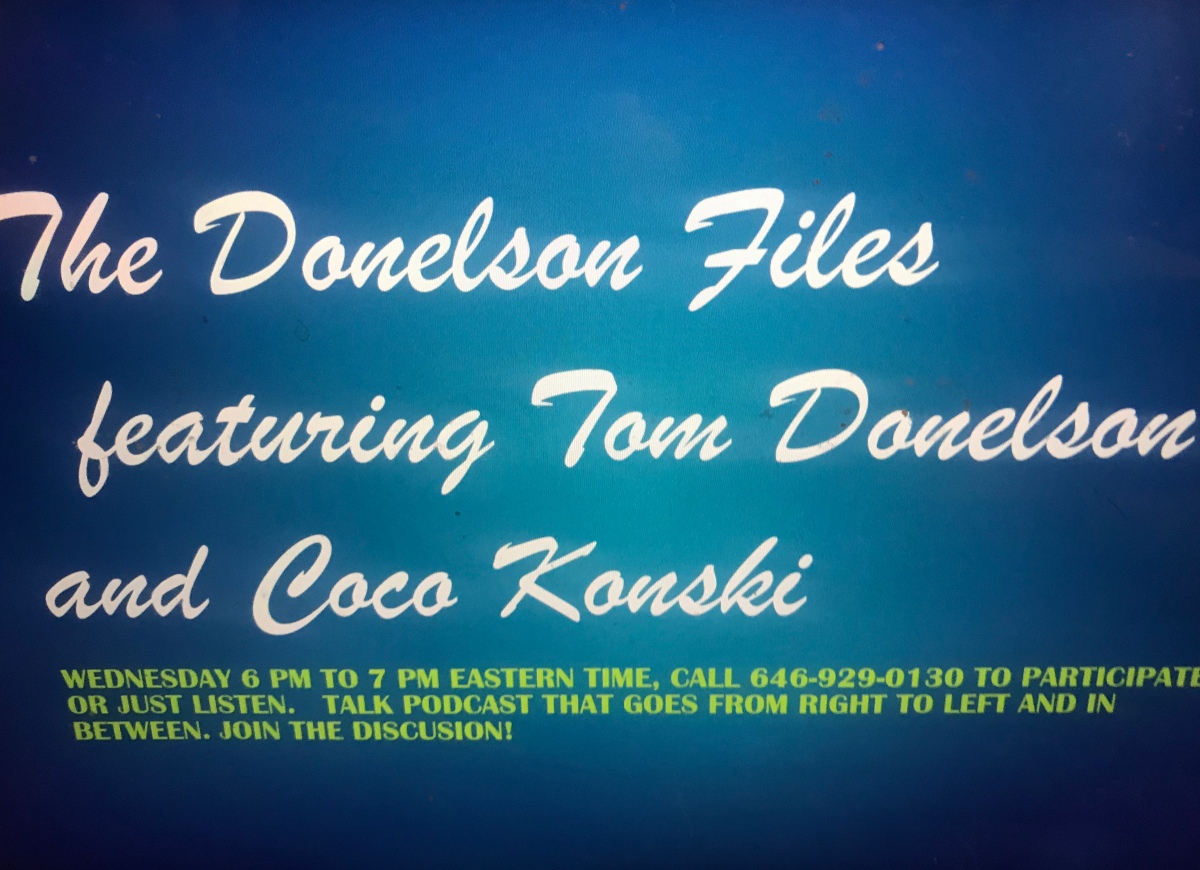 Thanks for joining the Donelson Files, featuring Coco Konski and Tom Donelson